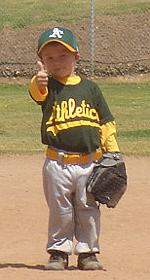 “In June 2009, my son Timothy was diagnosed with Cystic Fibrosis (CF). At the time, he was 4 months shy of his third birthday. CF is a genetic disease that affects not only pulmonary (lung) function but in many cases, affects the bodies’ ability to absorb nutrients from food. As such, many CF patients have difficulty gaining and maintaining body weight, even though they take enzymes with meals to help them with their nutrient intake. Additionally, we learned that maintaining a healthy weight had a direct affect on the pulmonary function of CF patients. Armed with this knowledge, we were more determined than ever to make sure Timothy gained weight. In our case, Timothy’s CF doctors were recommending that he take in 2000 calories a day.

Timothy did a fairly good job of maintaining his weight throughout the summer and fall. However, in November 2009, he became sick and lost 3 pounds in 3 days. While this does not seem like much, it was nearly 10% of his overall body weight. With the help of numerous doses of antibiotics, he was able to overcome his sickness, but was left at about 33 pounds at Christmas. Throughout January and February 2010, we gave him as much food and weight gain supplements (usually high calorie children’s shakes) as we could. During this time, he was able to gain back just one pound, leaving him at 34 pounds.

In early March, he was hospitalized for 3 days with a respiratory infection. During this time, a friend of mine mentioned that he had begun using liquid egg whites from Egg Whites International. He thought that it might help Timothy to gain weight. I immediately bought them and began to use them the day he got home from the hospital. He typically takes in 1 to 1.5 cups per day, usually in his cereal or milk.

After just two weeks Timothy had already gained 1.5 pounds. The doctor was truly astonished and asked us what we were doing. We were honestly able to say that the only change we had made was to introduce Egg Whites into his daily diet. The dietician was consulted and was extremely concerned about our feeding him egg whites. She stated that raw egg whites would actually keep him from absorbing nutrients. We explained to her that the product we were using was pasteurized and homogenized. However, she had to look for herself, so she went to the Egg Whites International website while we remained in the examining room. She immediately came back and said that there was no problem with us continuing to feed it to Timothy as it was completely safe, but that she did not necessarily agree with us that it was the reason for his weight gain.

Last week, Timothy returned to the doctor for his regular quarterly checkup. We were truly astonished by his weight. During the three months that he had been eating egg whites from Egg Whites International, he gained 4 pounds – more than he gained all last year. We truly believe that his weight gain can be attributed to including egg whites in his daily diet. We have begun communicating this to others within the CF community and can only hope that others have the same great results that Timothy has seen!”